This article introduces a novel approach to solving flow and pipe-sizing problems based on two new dimensionless quantities that are independent of line size and flow.

Process engineers are often faced with the task of sizing a pipe for a specific flow. A common approach to this problem starts with a typical fluid velocity (e.g., 5 ft/s for a liquid with properties roughly similar lo water). Calculating the pressure drop across a line sized in this way is a straightforward matter, involving the friction factor and either the equivalent length or the sum of resistances to flow (the K values). This calculation is detailed in many standard references.

However, that is only one of three possible pipe sizing/flow problems an engineer is likely to encounter. The other two, which are encountered less commonly, are:

The solution of either of these problems typically requires an iterative approach. This article introduces a novel approach for the direct (non-iterative) solution of such problems.

The Bernoulli equation, also known as the mechanical

energy balance, is the basis for understanding flow in pipes:

The first term, accounting for kinetic energy changes. is usually small compared to the other four terms, and thus can be assumed to be negligible. Note that for line sizing puqmses, the envelope for a mechanical energy balance typically excludes rotating equipment (e.g., a pump or a turbine) and focuses on the terminal pressure conditions, elevation changes, and friction losses: the rotating equipment is then sized to meet the conditions derived from this mechanical energy balance.

The second tc1m in the energy balance refers to elevation changes; those are typically defined as pait of the conceptual layout of the proposed line. The third term, referring to the difference in terminal pressures, is also typically defined as part of the piping layout. This approach focuses on the fourth term, lw.r, the work lost due to friction:

In this equat1on,Jis the Darcy friction factor:

The friction factor is a function of both the fluid

Reynolds number, Re: Dvp/�1, and the relative roughness t/D. The relationship between these quantities and the friction factor is expressed graphically in a Moody plot, or mathematically in various empirical relations (e.g., the Colebrook or Churchill equations). To solve the types of problems considered here , it is necessary 10 introduce dimensionless   quantities that do not depend on the line size, D, or the fluid velocity, v.

Bennen and Myers (I) suggest that a plot or conelation of the friction factor./, a arunction of  Refl' 5 would  be useful in solving for line size if the flowrate and pressure drop are known. This dimension less quantity ( Ref 1S ) is drawn from two quantities already establishe d, namely, the Reynolds number and the Darcy friction factor. The velocity, v, appears in both Re and/ It ca n be eliminated by using the definition of the velocity:

The cliameler has now been eliminate d. Butf, and thus Ref IS, depends on the relative roughness. which presupposes knowledge of the pipe diameter. To get around t his , a new dimensionless quan1ity , the flow function , is introduced: 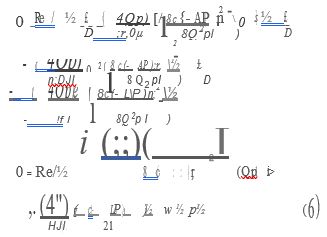 which can be calculated from known quantities. The absolute roughnes , E, is a function of the nalure of the pipe , which i known, and is independent of the line diameter.

A complementary dimensionless quantity that el imitates dependence on the flow is also needed. This has already been established in the form of the Karman number, Ka: 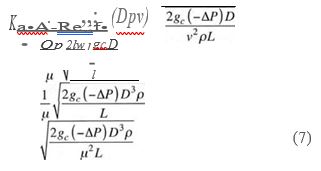 Many texts provide plots of the friction factor a function of the Karman number with the relative roughness as a variable. This may not be particularly helpful, however, since it presumes knowledge of the pipe diameter, which may not be the case. To work around this, another new dimension less quantity, the friction/roughness function, is defined: 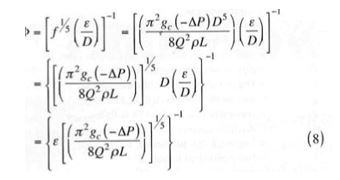 Guidelines for sizing pipe (e.g., Peters and Timmerhaus (2)) include typica l velocity in the range of 3-10 ft/s for liquids and 50--150 ft/s for gases. A quick check of Reynolds numbers calculated using velocities within these range s and properties of commo n industrial liquids (e.g.. organ ic liquids with viscosities of approximately IeP and densities on the same order of magnitude as that of water) show that flow meeting the se guidelines are indeed turbulent; similar comments apply for industrial gases. Most design courses guide the student to design for turbulent flow in pipelines, since this is perhaps the most common situation in industry.

Thus, it is reasonable to assume full turbulence and, as a corollary. define a slightly modified version of <I> to use the fully turbulent Darcy friction factor, f-t. This modified quantity <I>, is the product of ft1/5 and the relative roughness E/D. This quantity will prove useful in one of the later variations of the classic flow problem presented later.

For the calculation of flow based on pipe size and pressure drop, values of fT as a function of line size or relative roughness are tabulated in the literature (3) and listed in Tables 1 and 2. 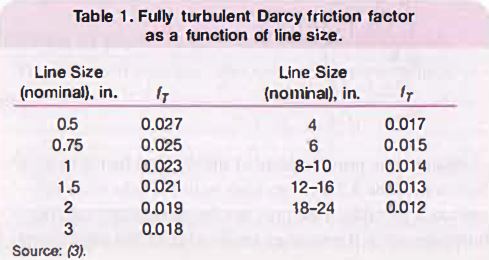 Plotting log Ka as a function of log 0 and 0 7 yield a family of parallel curves. Multiple regression analysis shows that these curves can be represented by polynomials with log 0 as the in dependent variable and the form:

We'll call this relationship the correlation polynomial. A cubic polynomial is generally sufficient to correlate log Ka as a function of log 0 (for reasons that will be dis ussed later).   Multiple regression analysis shows that a, b, c, d ... are well-correlated by polynomial. i n log <l>T. Thus:

Knowing the physical definition of the system (line [equivalent length, pre sure drop, nature of the pipe), the flowrate and the fluid 's physical properties (density, viscosity) allows 0, log 0 , <J:>7 and log <1>7 to be determined. Log <J:>7 can be used to calc u late the coefficients a, b, c and d (via Eq. 10 ) and the tabulated values for A, B, C, D and E, which are used with Eq. 9 10 yield log Ka and therefore Ka. Finally, knowing Ka leads directly to a theoretical line size: 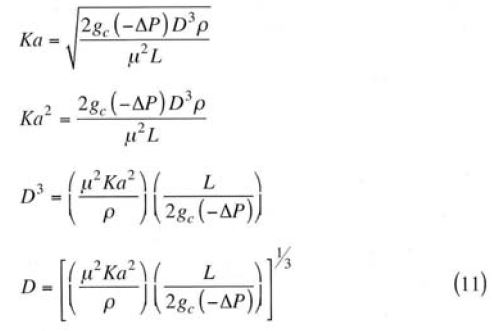 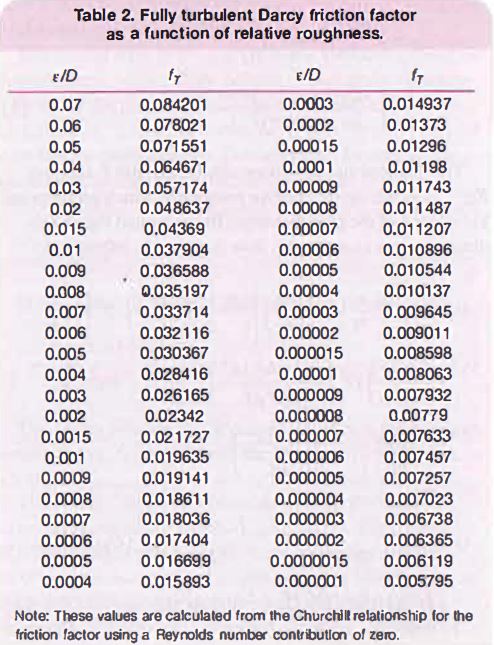 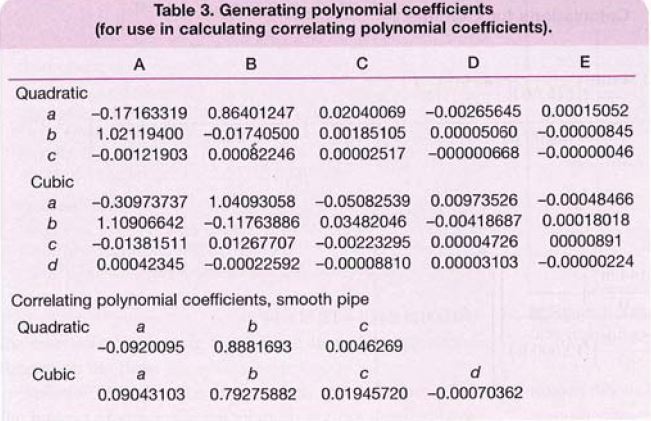 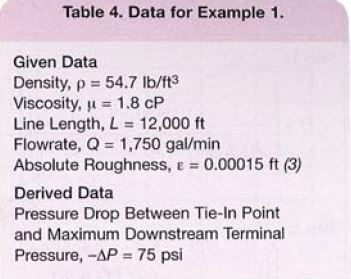 A refinery needs to move 60,000 bbl/d (1 ,750 gal/ min) of a product with an AP I specific gravity of 30 (approximately 54.7 l b/ft3) and a viscosity of 1.8 cP. The pressure at the new 1ie -in point (i.e., the source) for this new line is 90 psig. Due to the design of existing equipment, the discharge pressure downstream cannot exceed 15 psig. The proposed line routing (approximately 12,000 equivalent ft, accounting for fittings) is essentially flat. Refinery specifications call for carbon steel pipe to be used. What size pipe is needed?

Solution. The data for the problem are given in Table 4.

The calculations are detailed in the box on the next page.

This approach can also be used to calculate the expected flow through a pipe of a specified size with a known pressure drop. The terms used to calc ula1e Ko (and 1hus log Ka) are known. Again fully turbulent flow is assumed, since that is common in industry. Then EID can be calculated based on the known line size and the nature of the pipe, and fr can be obtained from the tabulated value, as mentioned previously. That allows <J)7 to be calculated. As well as the coefficients a, b, c and d for the correlating polynomial relating log Ka to log O. 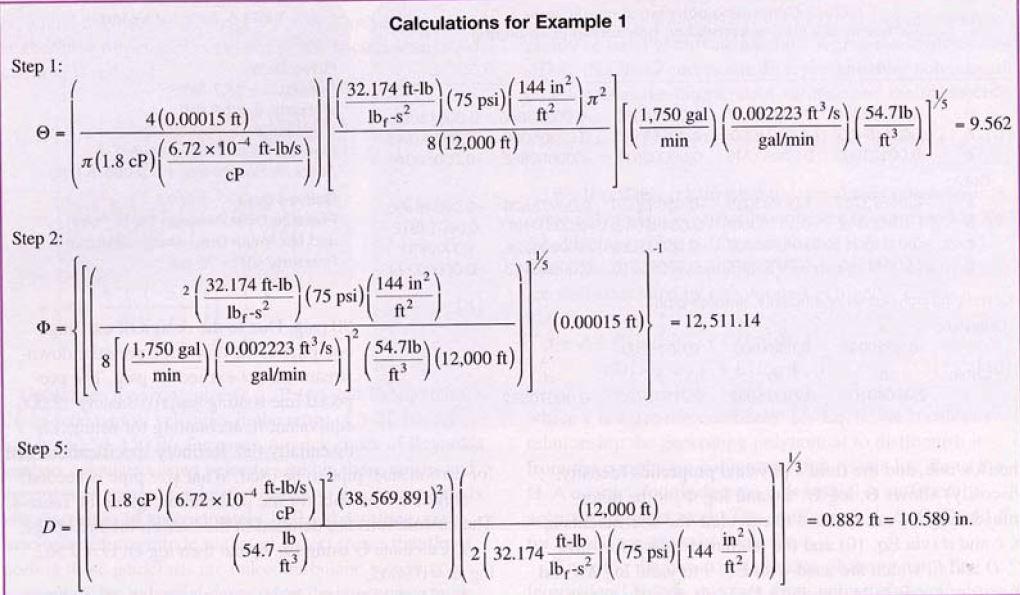 In the traditional approach (specifying physical properties and terminal conditions), one may calculate flow directly by postulating complete turbulence in addition to the known constraints (pressure drop, line length, physical properties). In that case, it is necessary to verify that the calculated flow does indeed yield a Reynolds number that qualifies as fully turbulent. Again, further refinement by iteration would be at the user's discretion.

Of the three roots arising from the solution of a cubic equation, only one i or interest. Values of log ? within 1he scope of this correlation fall within the approximate range of - 3.5 < log O <7.5.

With log 0 and thus 0 known, a flowrate can be found by solving Eq. 6: 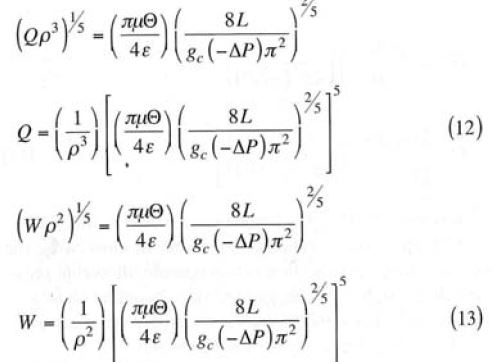 Chilled water at 45°F flows from a constant-level reservoir through a 2-in. Sch. 40 steel pipe, the end or which is open to the atmosphere. The pipe has an equivalent length of 175 ft, and the outlet is 35 ft below the liquid level in the reservoir. Neglecting any kinetic energy contributions, determine the flow. 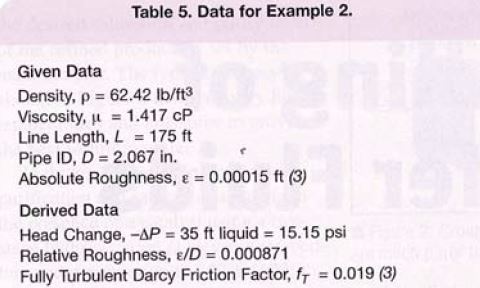 Solution. The data for this problem appear in Table 5. In the interest of space, the calculations are not detailed here.

The Special Case of Smooth Pipe

By definition, smooth pipe has zero roughness, which would render the definition of 0 use less. However, Gilmont's work (5) ca n be modified to co1Telat e Ka as a function of 0 *, where 0 * = Rej11S , to obtain a  relationship where one variable is independent of the line size and the other independent of the flowrate. Like the 0-Ka correlation, this 0 * -Ka correlation c n be represented well by a cubic polynomial. Therefore, the techniques discussed above for rough pipe can be applied to smooth pipe using the data at the bottom of Table 3 and the relationship in Figure I . 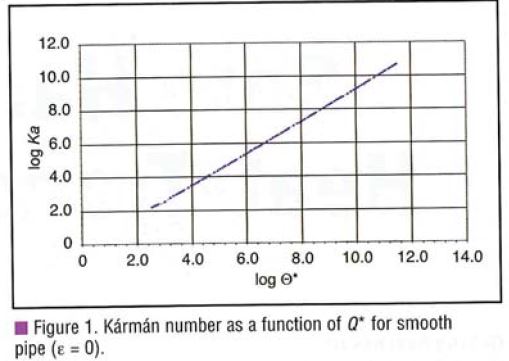 Line sizing is not exact or rigorous since it involves discrete standard commercial sizes rather than values of a continuous function. Calculations may indicate 1ha1 a pi pe diameter of, say, 5.4 i n., is required to accommodate a given flow, but that’s simply the solution to an equation.

Rather, one chooses the closest commercial size to suit the application based on the theoretical results of calculation, engineering judgment, and experience.

JOHN 0. BARRY, P.E., is senior process engineer with Middough, Inc. (Ml. laurel, NJ: E-mail: john.barry.engr@comcast.net. Previously, he worked for several engineering firms In the greater Philadelphia area. as well as performed contract engineering work for DuPont (Deepwater, NJ and Wilmington, DE) Premcor (now Valero: Delaware City, DE).He holds a BS in chemistry from the Univ. or Delaware, and an MS in chemical engineering from the Univ. of Maryland. He is a professional engineer licensed In New Jersey and Del aware. and is a member of AIChE.

Contact us to have Middough help you deliver your next critical project.